The rate of tax which many companies have to pay in the country that their head office is currently in can be very high. When a business reports healthy profit margins, the vast majority of it is deducted in tax. Consequently, a company doesn’t have as much capital to reinvest in their services or training their employees to increase their skillset. Having an offshore company is beneficial on many counts, such as the amount of money which can be saved on a tax bill. The rate of tax that’s applied in a tax haven is far less than what has to be paid in other countries. However, a low rate of tax might still be applicable. There are some tax havens which ask businesses to pay no tax at all, such as the British Virgin Islands (BVI).

Having a BVI offshore company is very beneficial. More and more companies every year are deciding to have an offshore formation in this country. There are many reasons which explain this popularity, such as the amount of tax which has to be paid. In 1984, the ‘British Virgin Islands International Business Companies (IBC) Ordinance’ was passed and it was later amended. It aims to tackle the problems which contemporary companies face. Now, there is no difference between an offshore company and a local company. Under the original legislation, there was no guarantee that offshore companies would be exempt from tax. The exact opposite is now true because an offshore company doesn’t have to pay any tax at all. 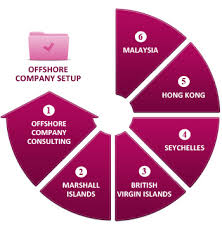 There are some tax havens which have been complained about in the media. Luxembourg, Jersey and the Isle of Man are criticised for their tax laws; several comedians have been mocked for choosing tax schemes which make them responsible for a very low rate of tax. However, the British Virgin Islands has not faced such criticism. If a business chooses an offshore company in the British Virgin Islands, they won’t face negativity because of its low profile.

By asking for help from a formation agent that has considerable experience of starting offshore companies in the British Virgin Islands, the best possible support will be given. Making the process as simple as possible, a formation agent will also explain any complex terms. As a result, their clients will know exactly what is happening and they won’t be unsure about the formation process at any given point.